The prize is awarded annually to companies whose significant efforts have shown the way in the transition of the energy system. The purpose of the prize is to highlight role models (outside the energy industry) with insight into the need to use renewable electricity and the business sector’s important role in this transition.

The 2020 award is cancelled due to Corona

Established by the Swedish Wind Energy Association, the prize was first awarded in 2011, and presented at the yearly VIND Conference. As the 2020 event is postponed due to meeting restrictions, so is this year’s renewable energy price. Nominations for the 2021 award will open at the beginning of the year.

Through long-term Power-Purchase Agreements (PPA), Norsk Hydro had by 2019 enabled investments of around €13 million in Swedish wind power projects which will produce nearly 4 TWh per year combined. Tor-Ove Horstad, Senior Vice President and Head of Energy Commercial at Norsk Hydro received the statuette made from recycled glass by artist Jonas Torstensson. 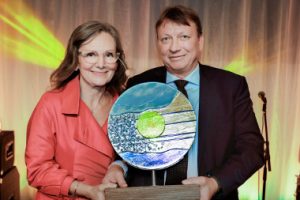 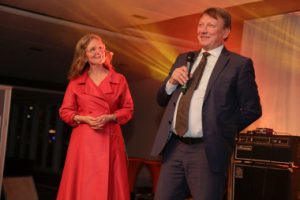 The Swedish Renewable Energy Award was awarded to the investment company Aquila Capital, which through its considerable investments in renewable energy inspired other companies to invest sustainably. Ingmar Helmke, Energy & Infrastructure Director at Aquila Capital received the sculpture as a sign of the award.

The Swedish Renewable Energy Award for 2017 goes to the American IT company, Apple, for its investments in renewable energy. The prize, which is awarded each year by SWEA, was ceremoniously awarded at the WIND conference on 12 October.

The Swedish Renewable Energy Award for 2016 was won by the real estate company, Wallenstam, for its extensive investments in renewable energy. The prize, which is awarded by SWEA each year, was ceremoniously presented to Wallenstam’s CEO, Hans Wallenstam, during the WIND conference on 26 October.

The Swedish Renewable Energy Award 2015 was presented by Swedish Vindenergi’s CEO, Charlotte Unger during the conference and dinner at “Wind – A Renewable Europe?” at the Waterfront in Stockholm on November 4. The recipient of the award was Google, and it was accepted by their Sweden Manager, Anders Berglund.

The statement reads:
Google showed its serious commitment to combating climate change by running its computer halls on renewable electricity. Through collaborative projects, they are going one step further and ensuring that new renewable production capacity is added. Google’s investments in Sweden can also serve as an inspiration for a more international perspective in the energy issue.

During the dinner on the evening of 21 October, the first day of Wind 2014 at the Waterfront, Stockholm, Swedish Wind Energy’s CEO, Annika Helker Lundström, presented the Swedish Renewable Energy Award to Anna Borgeryd, Polarbröd.

Polar bread is a family business which, through its long-term approach to business, aims to be a positive force in the transition to a sustainable society. With the recognition that renewable energy is a key factor, the company has now taken the next step in its pursuit of resource efficiency and sustainable solutions. Through an investment of more than SEK 150 million in four separate wind turbines, the Group aims to produce at least as much renewable electricity as the polar bakeries consume. Polar bread continues to be a beacon for every company that wants to combine business efficiency with care for future generations.

The Swedish Renewable Energy Award was presented by Annika Helker Lundström during the “Wind – Future Power Supply” Conference at the Waterfront in Stockholm.

With its new e-gas concept, Audi brings together the renewable electrical system and sustainable transport. By focusing on efficiency and climate at each stage, Audi has created an almost carbon dioxide-free process that provides both new opportunities for storing surplus electricity from wind and sun, and adding a new, emission-free fuel to the market.

Electricity from wind turbines produces hydrogen that reacts with the carbon dioxide that occurs when renewable biogas is produced from organic waste. The result is a synthetic gas, e-gas, which is expected to supply 1,500 of Audi’s new A3 Sportback gas car. With a broad system perspective and courage and foresight, Audi is showing the way towards a climatically sustainable society.

Tesla Motors accounts for a very small part of the world’s automotive production, but no other manufacturer has made the conversion of the energy sector of energy so attractive. Tesla also takes its responsibilities far beyond the usual, by ensuring that their electric cars can be quickly recharged with renewable electricity. Tesla is a model for companies and entrepreneurs around the world – Tesla has shown the way.

During the Wind – HARNESS THE POWER conference on 14-15 September 2011, The Swedish Renewable Energy Award was presented to IKEA.

The jury’s conclusion for the Swedish Renewable Energy Award 2011 reads:

The award was received by Eva Stål, coordinator of the environment and social responsibility at IKEA Svenska Försäljnings AB.

The purpose of the prize is to highlight role models with insight into the need to use renewable electricity and the business sector’s important role in this transition. IKEA has understood its role and I am delighted to present our first Swedish Renewable Energy Award to IKEA, says Annika Helker Lundström, CEO of Swedish Wind Energy.

The beautiful award in recycled glass has been designed by recycling artist Jonas Torstensson. It clearly shows the interplay between wind, sun and water.

To the pressroom
ENJOY YOU IN FINISHING

Swedish Wind Energy works to increase knowledge about the wind power industry and the understanding of its terms with politicians, opinion makers and decision makers.

Learn more about being a member